They're the cat's pajamas!

Gemma's Bio
"I had my first Flatcoat Hatti in 1990, she was a daughter of Champion Shargleam Skylark and started the love affair I have with the breed.
​
She was closely followed by Fossdyke Insignia  who had the potential to be a phenomenal show dog but was sadly killed in an accident aged 17 months. After losing Fossi I was gifted a 2 year old dog from Emanon breeding who I started competing in agility and obedience competitions with a degree of success as well as in the show ring.

We mated him to Hatti and from this litter came my first Champion in the form of Champion Gemswin Perhaps Love, Slipper went on to win 12 CC’s 8 Rccs and group placings, she held a full title as she qualified in the field. She was the top Flatcoat in 2000.

My next Champion came in the form of Show Champion Gemswin Abracadabra, his sister also gained 2CC’s and his half brother who I owned won a CC and several Rccs.

I introduced liver dogs into my lines in 1999 and I show, work and breed both colours with success ever since.
Abracadabra’s grandson became my next Champion , Show Champion Broomsward Hugo Boss By Gemswin , the naughtiest flatcoat ever that has passed his mischievous nature on!

Hugo proved to be an excellent sire with winning  progeny in the UK,  Germany, Norway, Holland, Lithuania and Sweden before I lost him in 2020, I also handle a number of peoples dogs and his son Ch Wiccanssage Hugo’s Dream JW SGWC has been a big winning son.

I imported my first Flatcoat in 2011 and have imported 3 more dogs from Europe since then to enhance and compliment my lines, my lovely Swedish bitch Sh Ch Moonstruck Macadamia ( Sonja)  finally became a champion at the age of 8 in the summer 2022 and 24 hours later her daughter Sh Ch Gemswin Dressed For Success ( Esme ) gained her title, two champions in a day…absolutely amazing, Sonja is now retired and I hope to have lots of fun in the show ring with Esme who really is a show off!

To me it is essential that my Flatcoats are a dual purpose breed and during the shooting season they work on shoots 3 days a week , often being shown in between those days. In 2017 my picking up team won the BASC Picking Up team competition at Crufts, in 2018 they were 2nd place, and 2019 placed 3rd all the dogs in the team then went into the breed classes and had good placings.

I have served on the judges committee of the Flatcoated Retriever Society for over 20 years and have been the junior secretary where I encouraged young handlers and owners of Flatcoats to participate in competitions with their dogs. I am currently the membership secretary of the Southern Flatcoated Retriever Club &  I also organise the breed booth at Discover Dogs in London every year.

In my working life I regularly help people train their dogs in a variety of disciplines and love handling for owners in the show ring, I also deal with behavioral problems as well as being a director of my husband Marks  telecoms business.

I am honoured to have been given this opportunity to judge your wonderful dogs."
Gemma & HER DOGS 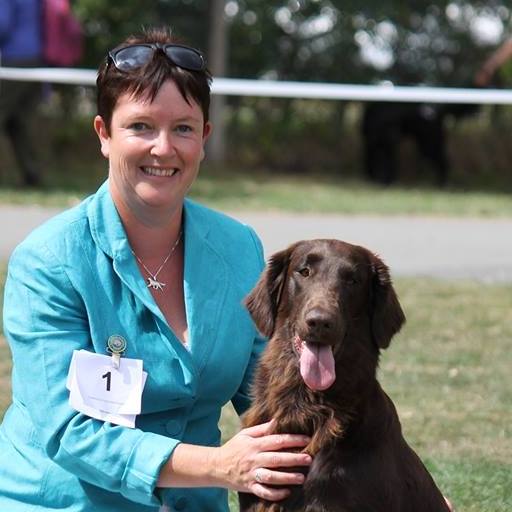 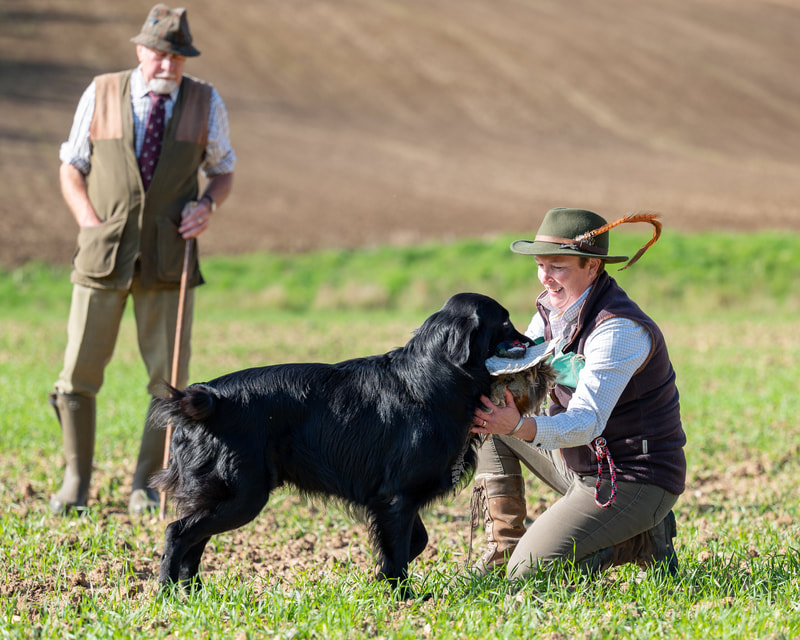 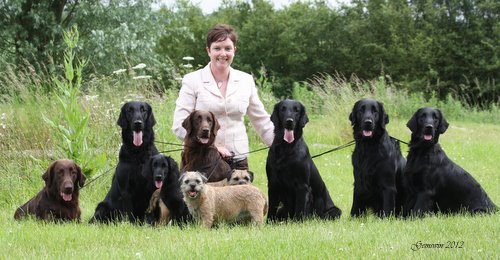 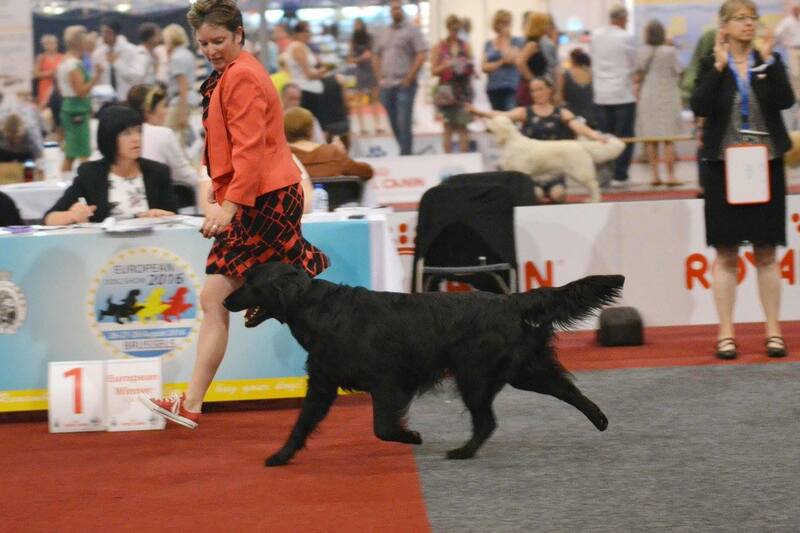 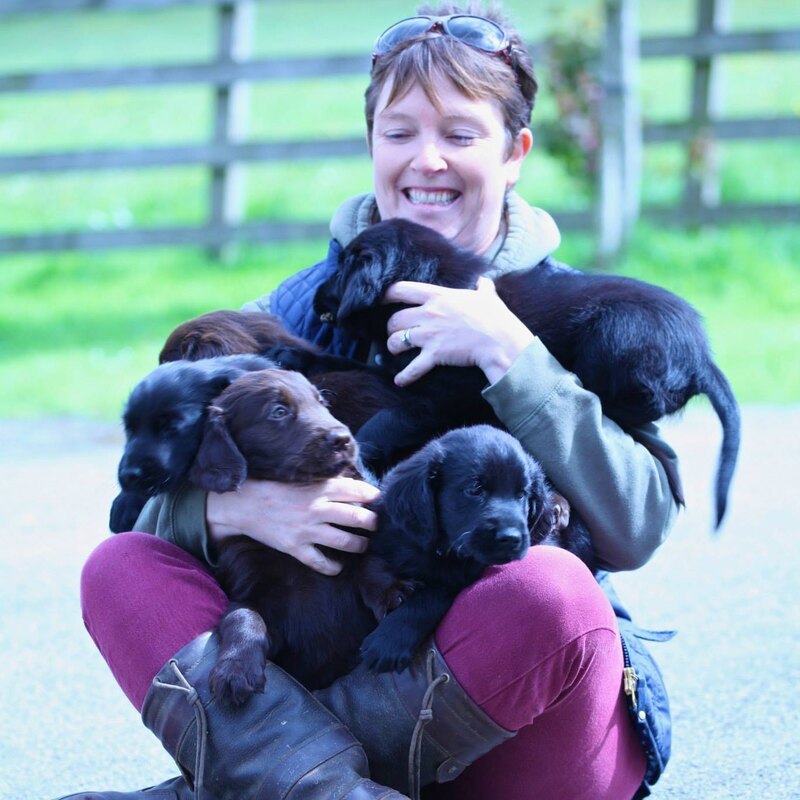 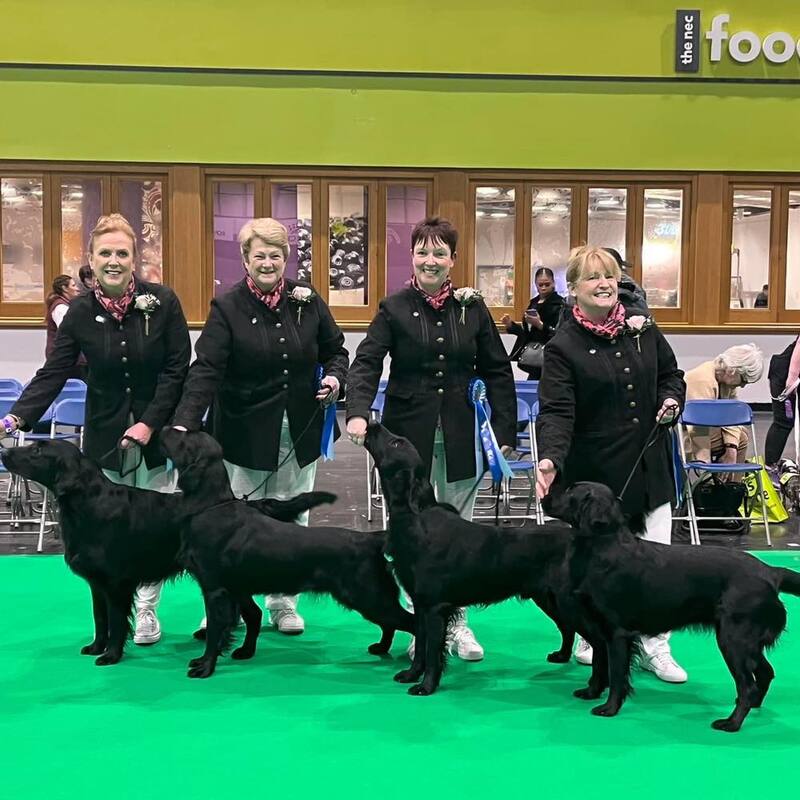 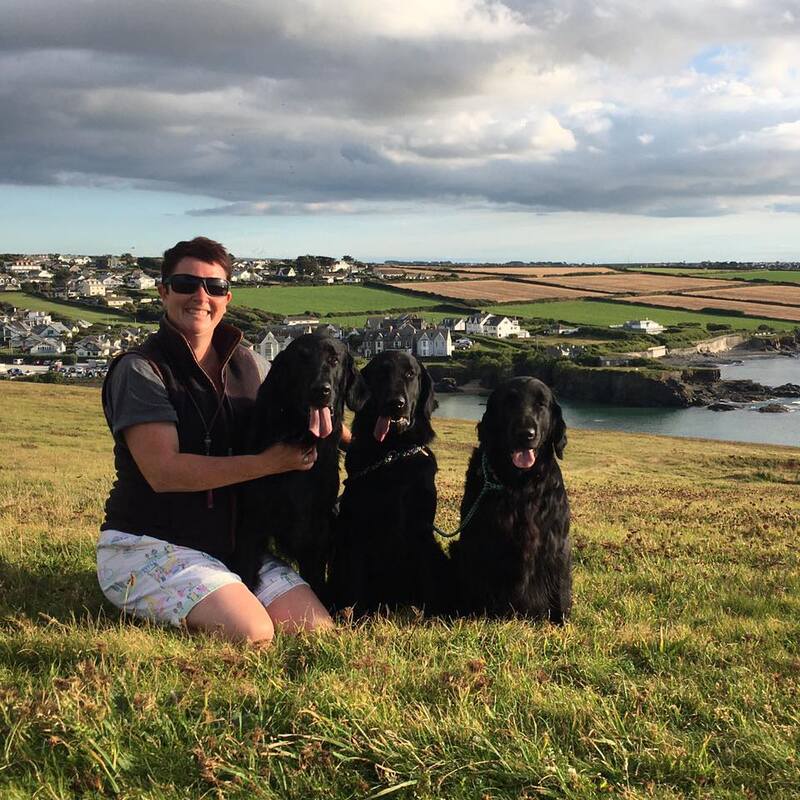 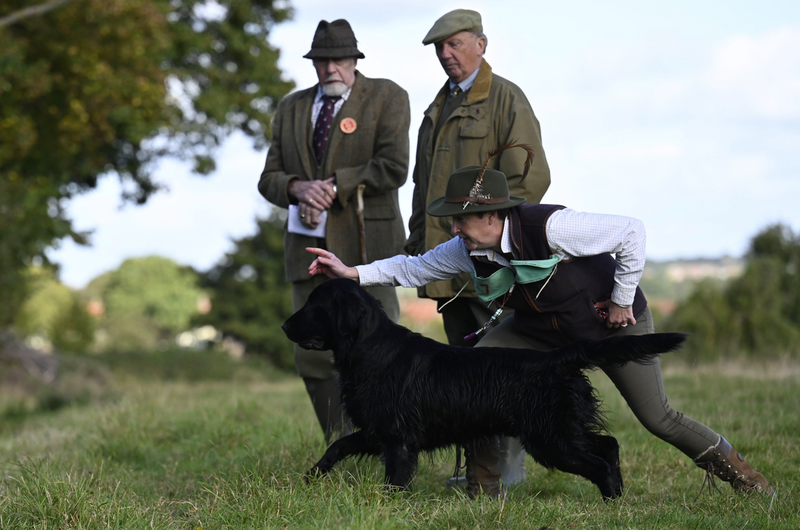 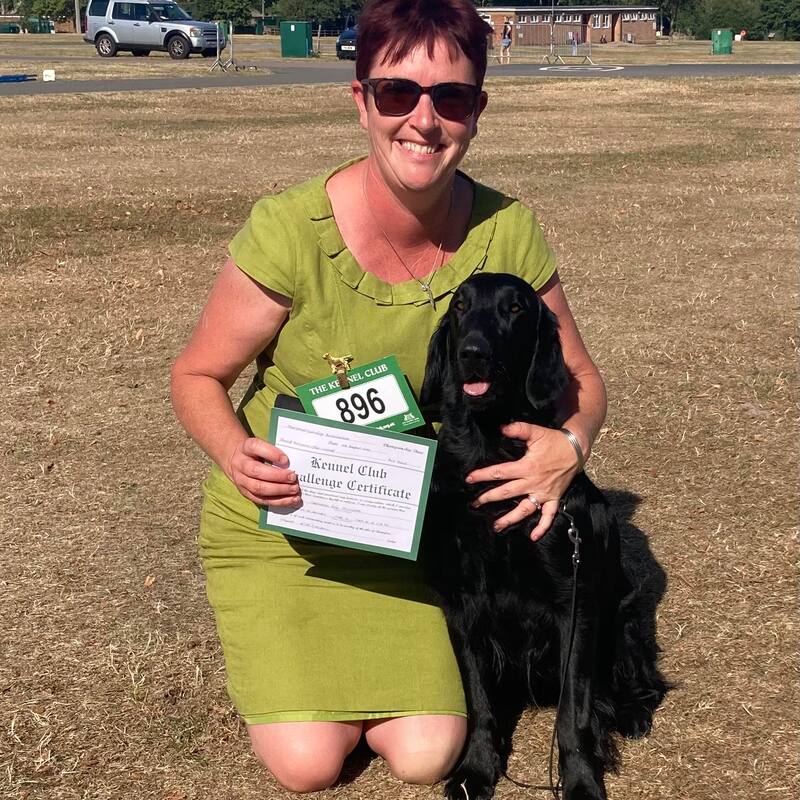 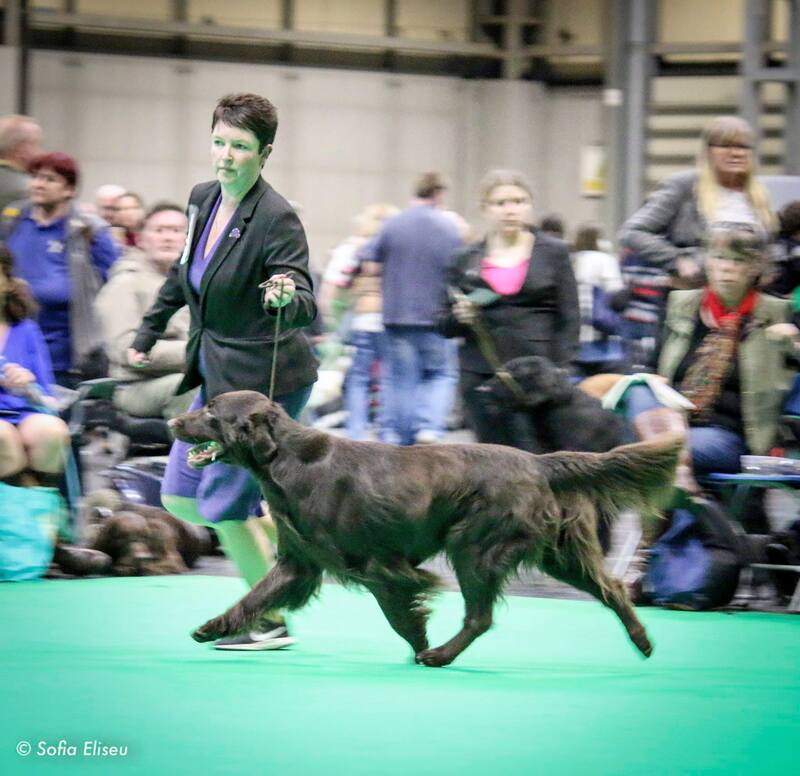 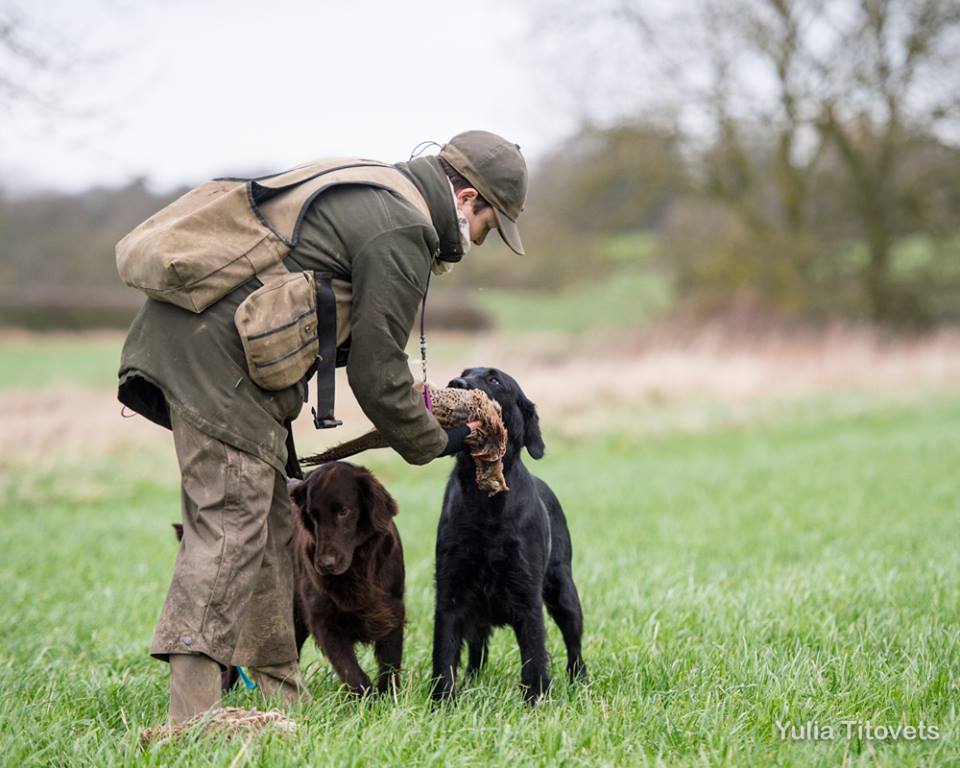 Danette's bio
Unlike most people in the “dog world”, I did not grow up with dogs as a child, despite being an animal lover in general.  I got my very first dog in 2002 – a handsome purebred yellow male Labrador Retriever named “Skyler”.  I promptly fell head over heels in love, not just with my dog, but also with the art of training and the magic of that mystical bond between dog and handler.  He taught me far more than I taught him on our journey from Novice A through Utility and RAE titles, and I am forever grateful that he set my feet on the path to becoming an AKC Rally judge.

I have been competing with my Labrador Retrievers since 2008 in AKC Rally, Obedience, Agility, and most recently Dock Diving and Hunt.  My dogs and I have earned multiple UD & RAE/RM titles, multiple High in Trial and High Combined awards, Rally championship, and multiple Agility championship titles.  I was honored to judge the 2018 AKC Rally National Championship in Ohio, and I still actively exhibit in Rally especially enjoying the new AKC Rally Master class.

I was raised in Western Massachusetts, and I currently reside in Meriden, CT with my husband and our two Labradors.  Our 12 year old chocolate female “Ellie” is a retired certified wilderness Search and Rescue dog and AKC & WCRL Rally champion, and our 2 year old black male “Enzo” is a budding star in Obedience, Rally, Agility, Dock Diving and Hunt.
​
I became an AKC Rally judge in 2013 out of my passion for the sport, and I strive to make it a fun and successful experience for exhibitors and their dogs.  I enjoy having the best view in the house to watch all of the happy smiling faces and wagging tails, because it truly is all about the beauty of teamwork and the loving bond between dog and handler.
Linda's Bio
I have been involved in dog shows all my life. I attended my first obedience class as a small child, since my mother was president and obedience instructor of the local kennel club when I was born.  I finished my first Breed Champion at age 14 and continued to compete in the Breed ring for the next 15 years.  However, in 1993 I decided to give obedience a try. After completing my first UD, I started in Agility, but then the new sport called “Rally” popped up in the dog show world.  Always ready to try something new, I jumped in with both feet.

I currently judge Obedience and Rally. After years of exhibiting, I know how much hard work and sacrifice go in to training a competition dog.  Many years ago, a close friend, long-time obedience judge Ken Nagler, strongly urged me to become a judge after watching me compete.  I am glad now that I took his advice to heart.

I live in Salisbury, Maryland and teach competition Obedience and Rally classes for my local club. In the past, I was on the Board of Directors for 13 years, secretary for 2 years, and president for 4 years, as well as being Obedience/Rally Class Chair from 2005 to 2011. I am also a member of the Poodle Club of America.

I look forward to judging the wonderful dog and handler teams attending the 2023 Flat-Coated Retriever Society of America Specialty, and I wish everyone GOOD LUCK!
​
Sandi's Bio
I have been a student of dog training since 1983 and a member of Capital Dog Training Club of Washington, D.C., Inc. since 1984.  Over the years, I have trained and competed with three Basenjis and three Cavalier King Charles Spaniels in the following dog sports:I am a member of Basenji and Cavalier breed clubs.  I have taught classes in obedience, rally, agility, and Scent Work.

I currently judge all AKC Rally classes and Novice and Open obedience (i.e., seven of the ten AKC obedience classes).  I am a provisional Scent Work judge for Novice and Advanced classes.  I have judged UKC obedience and rally and have been approved to judge CDSP (Companion Dog Sports Program obedience) trials.

In my competition “career,” I have enjoyed achieving several notable and unusual breed achievements.  Among my most treasured memories are the good times spent with my dogs.  Take time to train and play with your doggy family members, and enjoy your special time in the ring with your best buddy!

Thanks again for asking me to judge
Sherry's BIO
I have dabbled in Rally and herding, as well as competing in UKI. However, my focus is AKC. I have also served on the rules committee for AKC agility rule changes. While agility seems to occupy the majority of time, in my other life I am a former teacher of Health and Physical Education and a retired Physical Therapist. When not judging, competing, or training, my time is spent golfing, swimming, biking, pickle ball, and anything else that keeps me moving.
​
I really enjoy watching people compete with their chosen canine companions. I especially enjoy the specialty events where I get to watch people enjoy the sport of agility with the breed they have chosen to be their best friend. It is the founding principle for the AKC that people chose their breed and strive to bring out the best of that breed in every endeavor.